Who says women couldn’t do anything in the 19th century? Not Isabella L. Bird. Ladies and gents, listen up. Here’s a story full of spirit. Dear Miss Bird was a sickly soul, but despite her weakness, she charged ahead endeavoring to see the world and write about it. And so she did.

As simple as that. She made choices. Didn’t expect others to treat her in a particular way, but noted when people treated her kindly. First she went to Australia, then China and finally to Colorado where she gifted future generations a marvelous look into one woman’s fearlessness and heroic curiosity.

How many of us modern girls would throw our cares to the wind, travel alone or with strange men into deep mountain ravines and sleep in insect infested hovels for fun? How many of us would climb such treacherous mountains on horseback and suffer being thrown and tumbled over by said horse?

Isabella refused to ride side-saddle, yet threatened to sue a newspaper when a writer said she dressed like a man (which she most definitely DID NOT!). She fell for a famous handsome bad boy “Rocky Mountain Jim” who just recently lost his eye to a grizzly and despite his bad reputation quoted poetry and seemed bewitched by this strange English lady who found him tucked in a little valley of the mountains.

Their romance was ill-fated and only a year after she left him in his frosty mountain solitude he was shot dead. 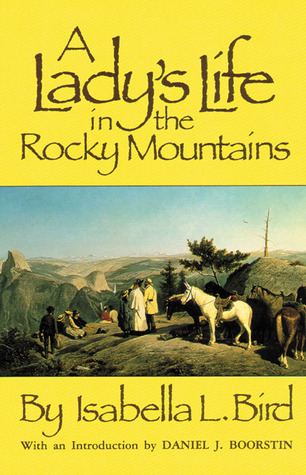 Do you like sunsets? Do you like trying to describe them? I get about as far as saying, “It was a pink sunset . . .”  But not Isabella. Some people are born to write about natural things in such a way that the reader feels nearly as in awe as the writer (and without photographs!).

When we bemoan our boring lives or how fate has made us women or how life keeps throwing us curve balls we need heroines like Miss Bird. She shows us from her far distant time that we hold the key to our adventurous lives. God gives us the mountains and the sunsets, the tumbling horses and the people we come across on our travels, but He lets us decide how we’re going to handle it all. Isabella made do and then some. She didn’t hate men for being men and didn’t hate being a woman. She was who she was and that was all she needed.

So let’s be happy in our skins today. Men and women alike–I love you. Now off you go! Have an adventure or read this book.

Like Loading…
← “Come, pensive nun, devout and pure, sober steadfast, and demure, all in a robe of darkest grain, flowing with majestic train.” John Milton
→ “There is no exquisite beauty… without some strangeness in the proportion.” Edgar Allan Poe