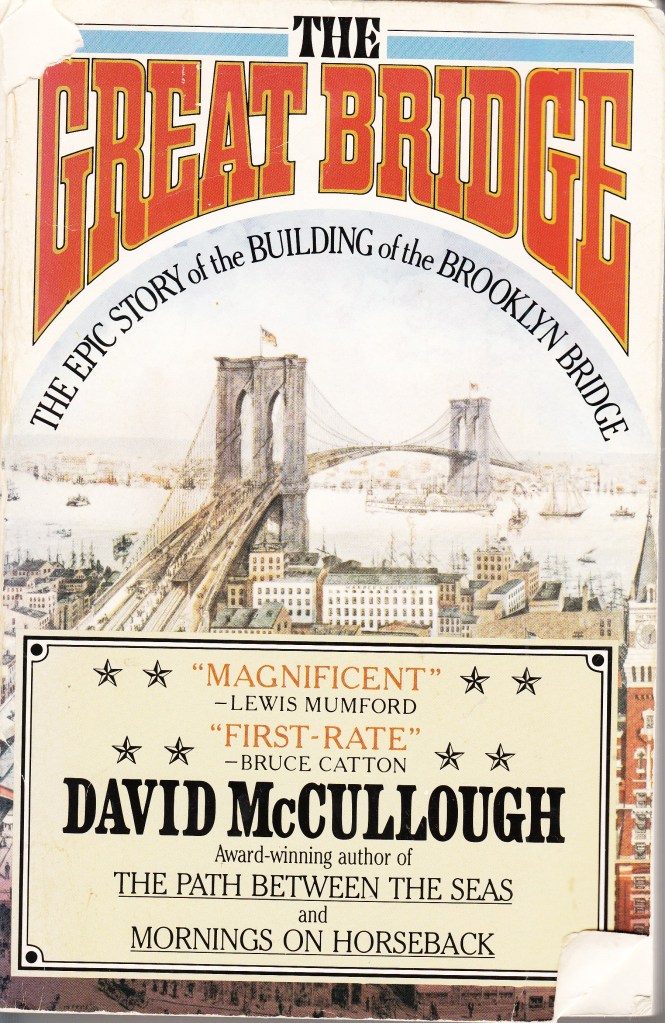 Why history should be written for the masses.

Men and women of integrity, listen up! The popular opinion that most Americans during the Gilded Age were stealing land and involved in corrupt schemes has some holes in it. Maybe not too many–but some. Enter Washington and Emily Roebling. I’ve introduced them to you before from The Great Bridge, but damn they’re good.

It’s over a hundred years after their incredible life’s work was completed and they manage to make me want to be a better person. If you read only one chapter in the book go to the one about Emily because it’s not just about her, it’s about THEM. Talk about adorable couples! They even kick each others shins under tables for fun. After only six weeks Washy proposed to Emily with a diamond ring (he was still in the army, in uniform–sigh). She said yes.

There’s a few pages of this sweet stuff. Cynics, step away from me. I love this!

Now the book is about a bridge. Ho-hum and all–but not so. I tried to build a puppet stage with Elmer’s Glue once and even I came away with at least a vague sense of how the Brooklyn Bridge was put together and it was strangely very interesting (my husband the engineer glanced over at me shaking his head with a smile at my sudden obsession with bridges–after railroads).

And then of course there were scandals and hurt feelings. I kept waiting for the terrible shoe to fall–the one that said Washy took bribes or cut corners–but the exact opposite happened. I was treated to that rare ennobling feeling you get when you’re in the presence of people who live with great integrity and compassion. Washington, how is it that through every set back and through every horribly painful moment of your protracted illness that you stayed so decent?

Emily had something to do with it. She married a lively, strong and intelligent young man and now 14 years later he was irritable and housebound and still 100% in charge of the building of one of the greatest bridges in the world. He wrote that at one point he considered giving up. His physical and mental anguish too much, but then his best friend, Emily stepped in. She didn’t take over, but she refused to let him give up. She stayed with him night and day. Made certain that their house remained a refuge and made certain that despite what must have been a very heart-breaking turn of events that he knew that she loved him and admired him.

His mind–a brilliant one–worked overtime. His vision had turned against him so she wrote out his long, detailed orders and plans–pages and pages in her fine hand–every day for YEARS!. She read him the papers and became his eyes and feet traveling to the bridge site to report back what she saw as the many workers looked on admiringly.

I’ll never build a bridge, but I do have a marriage. I wonder sometimes if I would be self-sacrificing if something happened to my engineer. I’m not really known for my compassion and after reading about Emily’s devotion and even the way Washy didn’t just throw his hands up when wrongly accused of scandal but fought the good fight I wonder what sort of person I really am. We’re all always told were basically good, but am I really?

This is not the time to step in and tell me I am. We’ve been programmed to do that even with our kids when they suck at soccer. And it’s getting worse (maybe it was always this way). If every person’s way is as good as the next guy then there really is no need for history or religion or morality or excellence. We’re all just going to die anyway. Isn’t watching kids play soccer just as good as watching the World Cup? I wouldn’t know. I like American football.

Integrity, graciousness, self-sacrifice and abiding love often lead to lives of suffering and depth and in all of that is a gift to the world. When you stand next to or read about a hero there’s a bracing excitement, a thrill and wonder. I don’t know why but it makes you look at your own work differently. It makes you look at love differently.

People like the Roeblings should be our heroes, should be on t-shirts and coffee mugs. I know there’s going to be a movie and the Harry Potter guy is going to play dear Washington (ugh). I probably won’t go see it, but I will recommend you read this book.