Grenville looking cool, hanging out with the guys.

Okay, you non-history buffs–this isn’t really about a Civil War soldier railroad guy so calm down. Well, it is sort of. A while back I wrote glowingly of Grenville Dodge, but (and this is the good thing) he’s more complex than I originally thought, not quite so heroic in all things. In fact he was a hater. He hated blacks, Irish, Catholics (he really hated Catholics) and most other people. I don’t mind someone who hates with abandon–at least they’re being fair.

It seems he also may have painted a hand injury in a different light from the way it really happened (he forgot he had a pistol in his pocket or something). But haven’t we all had those moments? Once when my husband and I were obsessed with making stained glass( it was like working in a sweat shop but we were the bosses and the workers) I grabbed the wrong end of a soldering iron. In this case there was no hope of me dressing up the story–not with a hostile witness standing nearby 🙂

Back to Grenville. I shouldn’t have put the guy on such a pedestal. I mean, he’s still great for the things he accomplished but he had a bit of a temper–once he threw soup over a black waiter because the guy was staring at the gold buttons on his jacket for too long. Dear Grenville was proud of this story, so okay, he was a bit of an ass. 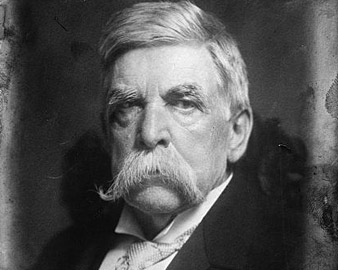 C’mon Grenville, give us a smile.

The characters in my series will get into railroad stocks, bonds and swindles in the late 1880’s so I’m not sure if Grenville will make a cameo but he does get high marks for character development, and I still adore him. Is that wrong? I think not.

My first article on Grenville.