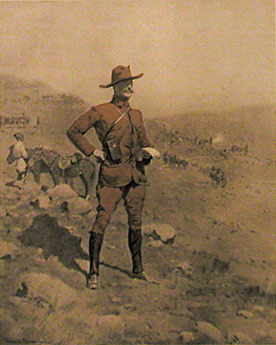 The Correspondent by Frederic Remington

This Thanksgiving pray for our leaders. They either don’t know what they’re doing–or they do.

Remember a few years ago when the American people and their  soldiers refused to support overthrowing Syria? Let’s do a little comparative history, shall we?

I’ll quote extensively from Wikipedia (not always the best source of info, but in this case they get it right) about a “Splendid Little War.”

“The Spanish–American War (April–August 1898) is considered to be both a turning point in the history of propaganda and the beginning of the practice of yellow journalism.

It was the first conflict in which military action was precipitated by media involvement. The war grew out of U.S. interest in a fight for revolution between the Spanish military and citizens of their Cuban colony. American newspapers fanned the flames of interest in the war by fabricating atrocities which justified intervention in a number of Spanish colonies worldwide.

Several forces within the United States were pushing for a war with Spain. Their tactics were wide-ranging and their goal was to engage the opinion of the American people in any way possible. Men such as William Hearst, the owner of The New York Journal was involved in a circulation war with Joseph Pulitzer of the New York World and saw the conflict as a way to sell papers. Many newspapers ran articles of a sensationalist nature and sent correspondents to Cuba to cover the war.

The situation prior to the Spanish–American War was particularly tense. Several members of the media, such as William Randolph Hearst, and of the military were calling for intervention by the United States to help the revolutionaries in Cuba. American opinion was overwhelmingly swayed and hostility towards Spain began to build. American newspapers ran stories of a sensationalist nature depicting fabricated atrocities committed by the Spanish. These stories often reflected on how thousands of Cubans had been displaced to the country side in concentration camps. Many stories used depictions of gruesome murders, rapes, and slaughter. During this time there was a riot in Havana by those sympathetic to the Spanish. The printing presses of newspapers that had criticized the actions of the Spanish Army were destroyed.

In the days following the sinking of the USS Maine, Hearst ran a story with the heading “The War Ship Maine was Split in Two by an Enemy’s Secret Infernal Machine”. The story told how the Spanish had planted a torpedo beneath the USS Maine and detonated it from shore. Hearst soon followed this article with one containing diagrams and blueprints of the secret torpedoes used by Spain. This Article was so convincing that even Captain Sigsbee of the USS Maine, who put in an official statement that judgment and opinion should be suspended until further report, now believed the Spanish were responsible for sinking his ship.

Many stories like the one published by Hearst were printed across the country blaming the Spanish military for the destruction of the USS Maine. These stories struck a chord with the American people stirring public opinion up into a divided frenzy, with a large group of Americans wanting to attack and another wanting to wait for confirmation. The Americans that wanted to attack wanted to remove Spain from power in many of their colonies close to the U.S. Those easily persuaded by the Yellow Journalism eventually prevailed, and American troops were sent to Cuba.”

9 thoughts on ““You furnish the pictures and I’ll furnish the war.” William Hearst to Frederic Remington”