A Fun Challenge: Having your character sell your book!

Of course I remember tricking Willy Weldon at the spelling bee my father organized at 1st Presbyterian, and I don’t feel bad about it. Not really, anyway. Everyone fawned over that little headachy cripple. It made me and my twin brother Fred sick. And it was years ago anyway. Willy acts all mournful–like we’re supposed to feel sorry his father is a morphine eater.  There’s even a book about all their trials and such called The House on Tenafly Road.

I’d never tell my brother, but I kind of admired Willy’s father, John Weldon, for fighting the South. But Willy. I just couldn’t stand the sight of him, so I convinced him I’d teach him the spelling words properly. The big joke was teaching him lieutenant wrong. Willy insisted he knew the spelling of his father’s rank, but his head was foggy after that fall from a horse out West (some say he was fleeing from a brothel at age 12). Only Willy’d end up in a house of ill repute so young. It’s just the way the Weldons are. Mama beat the skin right off my feet that night when she found out we taught Willy every word wrong, but it was worth it.

Personally I don’t think books should be written about morphine-eaters (even if they’re war heroes). Willy will only humiliate his family like his father before him. Mark my words. When people write about my life it’s going to be different.

I’m off to West Point. I’ll enter the military as a lieutenant, and I’ll spell it right. My brother Fred says, “It’s 1884 and times are changing.”  Some colored boys are trying to get into the academy. I say let them try, but I’ll be damned if I let anyone– black or white– beat me to the top of my class. So long, Willy and Englewood and Mama. Go and have your sorry little lives. One day I’ll show you all that I was worth something.

My name is Buck Crenshaw. BUY THE BOOK ABOUT ME: Weary of Running by Adrienne Morris.

PS~ That book about the Weldon family, well, it’s listed in a Goodreads giveaway so I guess you can read it if you want to.

The House on Tenafly Road

See the giveaway details
at Goodreads. 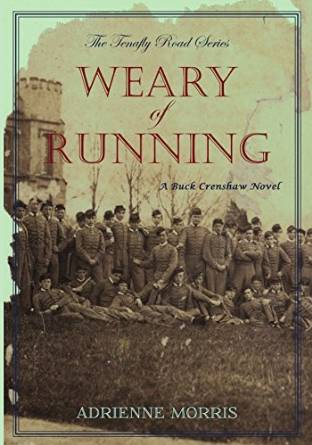 4 responses to “A Fun Challenge: Having your character sell your book!”