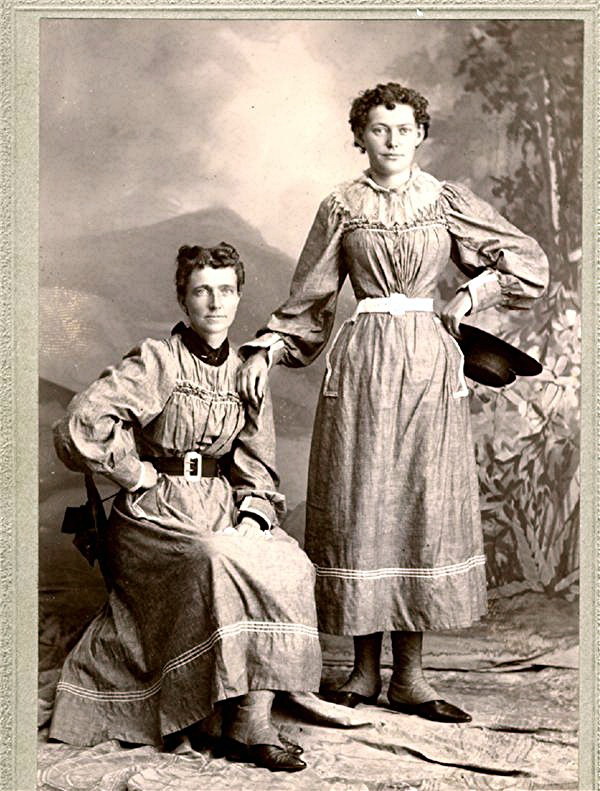 Their outfits were comfortable but frowned upon by polite society (yet they were taken in and treated well at almost every town they visited).

What if a shadowy stranger in New York offered you $200,000 (about what $10,000 was worth in the 1890’s) to walk across America in weird clothes and with only what you could carry. Would you go? Now imagine it’s before an electric grid and fast food. The newly built railroad tracks will be your only guide.

Helga Estby convinced her teen-aged daughter Clara to  accompany her on the bold endeavor–strike that–the desperate endeavor after a series of unfortunate events. Helga’s husband Ole may have wished for her not to go (what would the close-knit community of Norwegian immigrants think of Helga?), but the shame of being unable to provide for his large family after a debilitating injury  silenced much of Ole’s disapproval. They were desperate and not for the first time. Only a few years before Helga had fallen at a city construction site and been badly injured–her eldest daughter and Ole had taken over running the household until she was well again and a settlement with the city put them in funds  for a while, but the Panic of 1893 hit and all work dried up. Farms went under as mortgages were called in and life for the Estbys began to unravel again.

Helga and Ole were doomed to a boom and bust cycle. Young love left Helga with child and unmarried. Ole came and hid her shame. Did they love one another? Did they see something of themselves in each other? Their life was one of settlement and upheaval, one of putting down roots and ripping them from the comfortable homes and sod houses they lived in as they traveled west seeking stability.

By the time they took up farming in the Far West they’d had piles of well-loved children, but an accident and a mortgage to pay tore at Ole and Helga. Unemployed men with shame sitting on their shoulders are often tough to bear around the house. Fretful women are no picnic either so when the opportunity arose for Helga to march east she grabbed it. Maybe husband and wife were relieved. Maybe they felt it was their only chance.

The name of the wealthy female donor who offered the $10,000 reward to any lady proving she was strong and smart enough to make the arduous journey on her own has been lost to history.

How desperate Helga must have been to trudge through snow and rising rivers with no real safeguards, no assurances!

Helga and Clara carried small pistols and once or twice had to use them, but for the most part found American people to be generous and curious about their journey. They met with mayors and governors, women’s suffragists and vagabonds. Newspapermen always remarked on their intelligence, pluck and respectability.

As the end came in sight Helga worried. They were a few days past the deadline, but in the agreement the donor had made allowance for the occasional sick day. Clara had been sick and injured along the way, causing a small delay, but the newspapers in New York sang their praises and looked forward to covering a happy ending story.

The wealthy donor informed them that they were too late and there would be no happy ending. Helga and Clara were penniless in the big city. Gone from home for months they were now in need of work and a place to stay until they could save funds to get back to their family. A letter arrived from Ole. The note as I imagine it was brief:

Our daughter Bertha has died of diphtheria. You were not here when she asked for you. I did all I could do. The other children wait in the cold shed and I call to them but can’t see how they are for fear of infecting them. I made a coffin feeling quite alone in the world. The neighbors keep their distance.

Helga notes there is no reassuring sentiments of love. She worries and begs city officials for loans. Finally a generous railroad man buys her and Clara tickets west. Ole and the other children meet Helga with cold and bitter distance. Helga looks for Johnny her son. Ole shakes his head. Diphtheria had taken him, too and they were lucky not have lost everyone.

The children–and Ole–never forgave Helga for leaving them. Would they have felt differently if she’d won the money? I doubt it. Despite it all children resent a mother’s distance when troubles come. Ole, I imagine, had more complex feelings. His wife had taken a stand and had done no better than he had. Did he admire her courage? Probably–but he had already known she was courageous. I bet he blamed himself, but sometimes took out his anger on her.

Years later Helga’s manuscript was found and burned by her still bitter daughters. A daughter-in-law found a few newspaper clippings and saved them. And that is how we know about Helga today.

When telling my husband about Helga’s walk and how it ended with the donor withholding the reward my husband reminded me of my disdain for trophies at children’s soccer leagues given out for effort, not excellence. What do you think? Should Helga have been given the money?

26 thoughts on “No Trophies for Effort!”