“A weekly fantasy adventure [ by Winsor McCay], Little Nemo in Slumberland featured the young Nemo (“No one” in Latin) who dreamed himself into wondrous predicaments[1] from which he awoke in bed in the last panel.[2] The first episode[a] begins with a command from King Morpheus of Slumberland to a minion to collect Nemo.[3] Nemo was to be the playmate of Slumberland’s Princess, but it took months of adventures before Nemo finally arrived; a green, cigar-chewing clown named Flip was determined to disturb Nemo’s sleep with a top hat emblazoned with the words “Wake Up”.[1] Nemo and Flip eventually become companions, and are joined by an African Imp whom Flip finds in the Candy Islands. The group travels far and wide, from shanty towns to Mars, to Jack Frost‘s palace, to the bizarre architecture and distorted funhouse-mirror illusions of Befuddle Hall.[4]

“The strip shows McCay’s understanding of dream psychology, particularly of dream fears—falling, drowning, impalement. This dream world has its own moral code, perhaps difficult to understand.[5] Breaking it has terrible consequences, as when Nemo ignores instructions not to touch Queen Crystalette, who inhabits a cave of glass. Overcome with his infatuation, he causes her and her followers to shatter, and awakens with “the groans of the dying guardsmen still ringing in his ears”.[b][6] 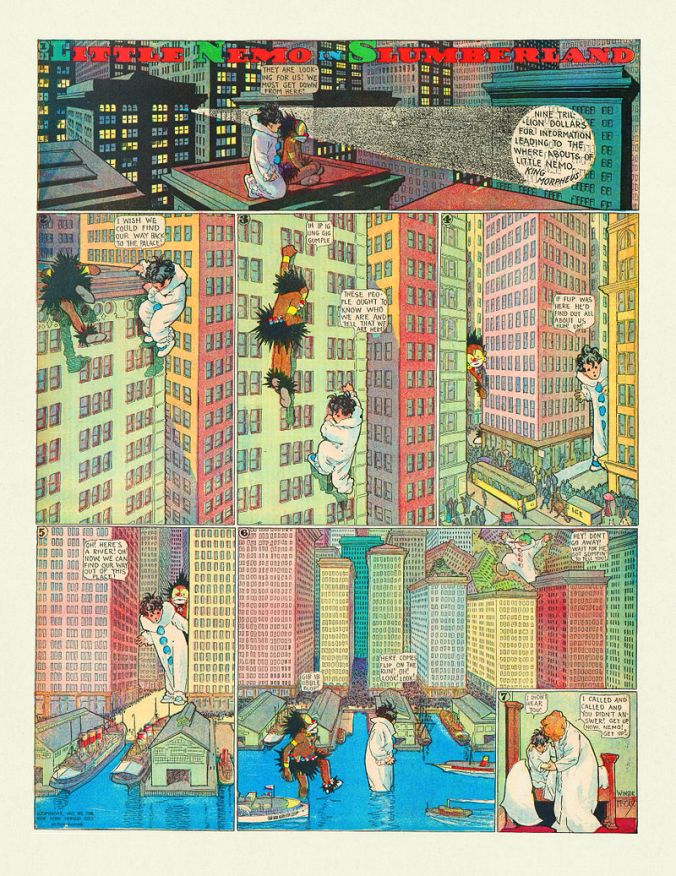 Nemo and Little Imp Explore the city as giants

Although the strip began October 15, 1905 with Morpheus, ruler of Slumberland, making his first attempt to bring Little Nemo to his realm, Nemo did not get into Slumberland until March 4, 1906 and, due to Flip’s interfering, did not get to see the Princess until July 8. His dream quest is always interrupted by either him falling out of bed, or his parents forcibly waking him up.” Wikipedia.com

Winsor McCay, an American illustrator, created Little Nemo in honor of his son Robert who must have had some fantastic dreams and nightmares! When Robert went off to war he came back shell-shocked after experiencing the real nightmare of battle. FOR MORE ON McCAY AND HIS BEAUTIFUL ART: COMICLOPEDIA

One thought on “Little Nemo in Slumberland”