What would you do if you saw a person you knew as an acquaintance being taken away by two strange men?

John Price escaped from slavery in 1856 with few skills and in sorry health. When the residents of the utopian Christian town of Oberlin, Ohio took him in, they found Price odd jobs and had him stay at various homes realizing Price didn’t have the strength or skill set to make it further up the Underground Railroad.

As the leaves turned on a chilly fall day in 1858 an Oberlin teenager picked up Price who’d been gathering potatoes on a freedman’s farm at the edge of town, for Oberlin was fully integrated and strongly abolitionist. Oberlin had been established by two Presbyterians who believed that Christians needed to work out their salvation by living a truly righteous life–one that advocated freedom for slaves. Oberlin College was open to men of all races and their town had hidden many runaway slaves.

Let us stop to wonder about men who establish towns. From scratch.

It’s obvious that I don’t have the moral courage to form a town based on my understanding of Christianity. I doubt I’d even have the courage to wear a t-shirt proclaiming my belief in the sanctity of all life (it helps ease my conscience that I look terrible in t-shirts, but still.). The men and women at Oberlin didn’t have to wear t-shirts. Their acts of courage and commitment were the greatest form of advertisement for the Good News of JC (I often cringe at saying Jesus Christ out loud).

My blog is a small one and I think it would be fair to admit that the likelihood of real harm coming to me for mentioning my Christian beliefs is relatively small and inconsequential in the grand scheme of things, but my ego is big. But enough about me. 🙂

John Price, the runaway slave picking potatoes, rides along with the teenager from Oberlin. The teenager slows his horse as another carriage approaches with two strange men. The men are slave hunters. They capture Price quite easily since the teenager is an accomplice in the kidnapping. Further down the road two white students from Oberlin pass the carriage carrying Price back to slavery. Price calls out to them in their buggy, but they turn their eyes away.

Ansel Lyman, one of the students in the buggy runs through the town of Oberlin upon his return with news of Price’s kidnapping, and the town comes alive. As men and women race toward Wellington, some with guns, the crowd grows as news of the kidnapping spreads. No one sits at home watching TV or watching their fireplaces.

In Wellington the slave catchers and Price watch from their hotel as the crowds gather. The catchers are armed of course but they fear their fate will be the same as the building across the way which happened to burn down that morning. I imagine this was a bit more than the catchers bargained for. The Dred Scott decision had made it legal to catch slaves in free states.

The people of Oberlin considered the Scott decision unconstitutional and morally wrong as did many brave souls in the North. Here we must remember that abolitionists were painted as extremists. Most people chose peace over righteousness.  I wonder if I would have done the same. I like staying home before the fire.

Rumors spread that the army will be called in. A few good men with guns rescue Price. A freedman eventually gets Price to Canada, but the incident challenges the nation.

The Rescuers as the men who stormed the hotel and hid Price are now called are marched to stand trial before a jury and judge of the Democratic persuasion who hate abolitionists. Two men are tried and both are found guilty. All the others after the judge frees them on bail refuse to pay and spend time in the jail across the courtyard. The head of the jail happens to support abolition and opens the place to visitors. At first it’s just the families of the men but before long people from across the North journey to support the abolitionists. Black and white men and women flood the area united against immoral and corrupt government policies and actions.

The Democrats‘ worst nightmare comes true. War is just around the corner, but forgive them for not knowing it just yet. 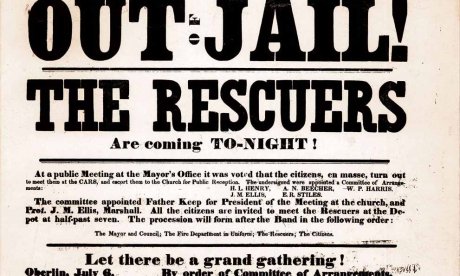 **Featured image of John Mercer Langston, a lawyer and Oberlin’s town clerk, came from a family of abolitionists. His brother Charles and his brother-in-law O.S.B. Wall were among the town’s residents who rescued John Price from a slave-catcher.

READ MORE: WHEN THE SLAVE CATCHER CAME TO TOWN