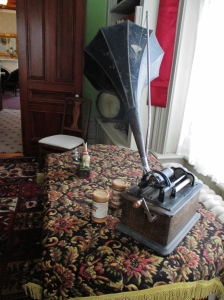 This may be the last time ever to hear the haunting, unusual and poignant songs of slavery!

So went some of the advertisements for the Jubilee Singers’ concerts in the early 1870’s. And it was true. For despite the many tours of the ensemble after the first few its heart changed with the death of their tireless conductor George White.

George White demanded much of the group of former slaves, children of plantation owners and those who never tasted slavery at all—their time, their health, their unswerving loyalty to the mission they believed was from God.   For such young men and women (the youngest only 15) they carried themselves with great nobility, shocking many of the Northern crowds who had never seen slavery up close and even those who despised their arrival and tried to be rid of them.

The wife of an innkeeper was tied back by a humiliated husband so she could not pummel the young black woman playing the piano in the parlor of the inn. The innkeeper’s wife was disgusted at the thought of dark hands on her ivory keys.

For many winter months the troupe went hungry. The mission society they were affiliated with saw George White’s passionate project as a fool’s mission and a slight embarrassment to their organization until after months of small crowds, blatant racism and food at irregular intervals something changed. At every stop, like the Jews wandering in the desert after their own escape from slavery, God in the guise of enlightened people provided just enough to keep the cold and hungry band from giving up.

“There were many times, when we didn’t have place to sleep or anything to eat. Mr. White went out and brought us some sandwiches and tried to find some place to put us up.” Other times while the singers would wait in the railway station, White “and some other man of the troupe waded through sleet or snow or rain from hotel to hotel seeking shelter for us”*

Henry Ward Beecher of the famous Beecher clan invited them to perform at his church in Brooklyn. The Jubilee Singers brought the house to tears.

Some people really hate the idea of a “white” hero helping his downtrodden fellow man– as if it makes the efforts of the talented group of singers less inspiring. At any given point the young people could have quit. Their mission was to raise funds not for themselves but their foundering and beloved school, Fisk University.

When someone survives a great trial in life they have two choices. To many, a quiet life remembering their heroism with satisfaction is the road taken. To some, remembering in their own trial the suffering of others, the only path is one that turns back with outstretched hand as soon as they reach a place of decent footing.

Some may remember from a PREVIOUS POST that George White came home from the war a shattered man. Tuberculosis lingered in his lungs. He married a friend’s sister when they met at Fisk. White managed the school’s shaky finances while his wife taught. This worry over finances and White’s love of music and the freedmen led him on an improbable journey. His enthusiasm and belief in his troupe when most people held little regard for the abilities of black people inspired the young men and women to believe in themselves.

They played before presidents and queens. At a time when many may have wanted to bury their sad songs with the many dead of the war, White saw musical value, saw a cultural treasure and demanded it be preserved. Many ex-slaves sang these songs to each other in ashamed whispers. White demanded they come into the light and respect themselves as valued members of God’s family.

In time members of the troupe were drawn away to pursue solo careers or work in other areas. White struggled not to feel abandoned by them. He’d lost his first sickly wife while touring England (he’d hoped the trip would heal her). His own tuberculosis came in fits of bloody coughs. Ella Shepherd ( soprano, piano, organ, and guitar) stayed true to her maestro. She worried White would die before returning to the states with his three young children.

White carried on. He insisted he practice with his beloved Jubilee Singers even when he opposed a certain concert they wanted to perform. I imagine he was caught up in the music when he fell from the platform and shattered his leg. For the rest of his years he could barely walk. His second wife was forced to clean houses. White had given every cent he’d ever made to the Jubilee Singers. He died of a massive stroke at 57.

What is the soundtrack of your life?

George White’s first troupe of performers were never recorded. By the turn of the century others eagerly sought to refine and record songs like Swing Low Sweet Chariot, but I imagine it wasn’t the same thing playing in the ears of soldiers passing field hands during the war. It wasn’t the same as the voices of The Jubilee Singers with only one foot out of slavery and wondering about a future yet to come.

Quote from DARK MIDNIGHT WHEN I RISE

Related: SOUNDTRACK (a wonderful post about sound-tracking your life)

WHAT IS YOUR AURAL HISTORY?

6 thoughts on “Jubilee Singers And Their Biggest Fan”

When was the last time you told a co-worker or family member or neighbor you loved them? Try it.
... love for our neighbours does not die the minute we enter heaven, it intensifies.
We are here to learn new things! Imagine a life of no curiosity. How is it possible? What new thing has inspired you lately?
When you overcome the fear of being judged by others, you are free from the fear of losing something and then you always keep yourself open to do any work, whatever it may be; Thus you will see that opportunity is always in front of you.
The product of benign neglect. These were an unexpected gift. We planted vines years ago snd then forgot all about them until now ❤️
The fact that we live at the bottom of a deep gravity well, on the surface of a gas covered planet going around a nuclear fireball 90 million miles away and think this to be normal is obviously some indication of how skewed our perspective tends to be.