Megyn Kelly the former anchor turned morning show host recently recalled a conversation with Roger Ailes who told her she had an “authenticity problem.” Whether you agree or disagree with her perceived politics is not what I care about here. What troubled me instantly was the sense that a growing number of people (including myself) in an effort to impress others, avoid fights and seem agreeable have this same problem.

“Viewers can spot a phony from a mile away,” Megyn recalled Ailes telling her. In her book, she said she grappled with this issue. “Why can’t I make friends more easily? Why don’t more women want to be around me? I had been so busy for so many years building up a protective veneer that it didn’t dawn on me that I might be alienating others—from viewers to potential friends.” Vanity Fair

I grew up in a world where people assumed other people had differing opinions (sometimes radically differing), yet everyone managed to understand that listening to extreme and opposing ideas was often a good thing. It either alerted us to the holes in our arguments or sharpened them. The notion that some ideas could not be tolerated was frowned upon and seen as immature.

A few times online I have stumbled into debates about heated issues. My experience was telling and common. In each case as soon as I stepped out of line to one side or the other I was demonized. As some of you know my mantra is that we’re all flawed. This is now seen as an extremist sentiment.

I believe what I’m supposed to think is that most of us are victimized .  Not all of us, mind you. There are those people—those people we won’t talk about here who painted masterpieces and invented light bulbs and semiconductors, worked 18 hours a day picking cotton, died to end slavery or for civil rights and wrote The Bill of Rights etc. Okay I will say it. MEN. Can we stop the silly hatred of them?

We are all victims of fate. We didn’t choose where or when to be born. If I’m going to admire anyone it’s going to be the person who actively overcomes their fated victimization, the person who is heroic. What is heroism? Is it posting a paragraph or two about injustice? Is it wearing a t-shirt or slapping a bumper-sticker on your car? I often wonder at the people so eaten up by hate that they choose to show the Christian symbol of the fish being devoured by Darwin. Isn’t it enough for these people to be at peace with their own beliefs? Why be so provoking? But I’m fine with them ruining the look of their car if they want to. I’d never think of demanding they stop.

A verse comes to mind: “You are like whitewashed tombs, which look beautiful on the outside but on the inside are full of the bones of the dead.” Matthew 23:27

Another story I heard recently was about a professor who was discussing a “sensitive” topic. He was baffled by the students’ lack of participation until a “brave” student confessed that she was afraid to offend anyone. The professor asked for a show of hands. “How many of you have been doing the same thing?” The entire class raised their hands.

Bravery and creativity don’t usually thrive in group-think situations. Here’s my confession: I often lack authenticity. I want to be liked by strangers. I worry if book sales will stop because I mention I believe in Jesus and that I had a conversion experience I can’t explain. I say glib things to seem clever and modern. I have difficulty making female friends. BUT . . .

I know in these moments of weakness there is nothing brave or satisfying about being cowardly. There’s nothing uplifting or fulfilling in claiming your victim card. It’s such a hollow victory. It leaves you mired in misery. I know this from experience.

Most people seem to sense that we’re here on this planet to be more than victims. It’s why we fantasize about being heroes or at least tagging along with one.

In MY NOVELS I don’t quite have perfect heroes. I know some exist, but in my world most of us are saddled with baggage, scars of our upbringing, societal preferences that make us feel inferior, an unbridled need to be liked, etc. What makes my characters heroes to me is that throughout their long existences they keep trying to get it right. Often they get things terribly wrong. Their maddening like the real people I know. Like me. But they are active. On some level, though they rarely admit it, they think they are made for something better–something heroic if only quietly heroic.

My heroes are the ones saddled with poverty, addiction, abuse, neglect and cowardice. They are the people who lose everything and still get up the next day. Bitter moments, even bitter years, plague us all but love saves the day. It saves lives—all lives. Authentic love forces us to think of others first. It forces us to see the beating heart behind the opinion we think is ludicrous. Love is not just for the people we agree with and not just for those of us with authenticity problems.

What about you? Are you authentic? Do you have any advice for those of us who can sometimes be slaves to our desire for approval?

OUR MINDS CAN BE HIJACKED BY SOCIAL MEDIA 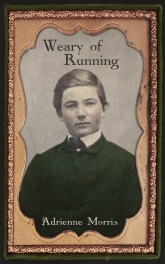 “Rich and colorful page turners. Morris has a fine sense of time and place and brings her memorable characters to life. She also tells a captivating story. You won’t find it easy to put her books down, and her characters will stay with you when you do. We can only hope she keeps writing and gives us more episodes in this fascinating chronicle.”
*Books available in paperback and in ebook form for most electronic devices.

Writing a book on my birthday. ❤️
Time to wake up!
It has long been an axiom of mine that the little things are infinitely the most important. Sir Arthur Conan Doyle, The Memoirs of Sherlock Holmes
Nala pretending to be a farm dog when she’s really dreaming of the couch ... she really doesn’t enjoy farm animals. They’re dirty.
Our reality, our true self, is hidden in what appears to us to be nothingness.... Thomas Merton
%d bloggers like this: