How do names shape us? In ways we often little realize. Parents and fiction writers have their methods of putting name to face. Some search lists and meanings long before the person is made flesh. Some, like me pick names at random.

I thought it would be fun to compare the personality traits of the characters I’ve written about as I finish editing the last book in MY SERIES to see if the names I’ve given them actually match their  traits found on FIRST NAMES MEANINGS. I was surprised at how close the descriptions came!

JOHN WELDON: In THE HOUSE ON TENAFLY ROAD Sergeant John Weldon struggles with addiction after the American Civil War. His plans to struggle alone are dashed when he falls in love. From the start I knew the story would be about redemption and God’s grace (though I struggled with the concept myself at the time). What I didn’t know was that John’s very name means “Yahweh is gracious.”

According to the website “people with the name John are extremely attached to family and are willing to make great concessions in order to maintain a harmonious relationship with loved ones.”  John Weldon’s tortured desire to keep his family together keeps the book going.

KATHERINE WELDON:  It is guessed by some that the name Katherine means torture. Katherine suffers something like torture being in love and married to John Weldon.   “A nervous and often worried little girl, her parents should provide as much reassurance as possible.” Here Katherine’s parents fail miserably. They blame her for a sexual assault suffered in early adolescence that sullies the family name and sends her brother off to military school to escape punishment for his act of vengeance.

When John Weldon appears, Katherine, still saddled with the anxiety of childhood, sees him as her knight.

FIRSTNAMESMEANINGS.COM says that Katherine’s ideal mate “should be good-looking, tall, intelligent and worthy of admiration.” Katherine’s admiration causes her to follow her husband into the wilderness while little understanding his moods and motives. He is tall though!

BUCK CRENSHAW: “Buck is active, energetic, dynamic, courageous and of a passionate nature. Seemingly adaptable and accommodating, he is nonetheless capable of gently but firmly asserting his rights and ideas, occasionally with a touch of cunning and opportunism or even by amoral means … He is very highly strung, so action makes a perfect outlet for this excess energy; otherwise he could experience emotional upheaval and distress. … “

Buck’s life is all about emotional stress as the adult survivor of an extremely abusive and dysfunctional family. Yet, it’s true that … “challenges and difficulties stimulate him and spur him on. He has a profound sense of justice, and can react violently to any kind of iniquity …”   (Buck feels justified in his abuse of a fellow cadet who treats him unfairly). Despite this Buck … “feels great compassion for his fellow earthlings which often incites him to get involved with groups and associations that have a social or political objective. (he converts to Christianity and joins a community of utopian visionaries). He is a highly intuitive man who nevertheless prefers to present his more logical, rational side to the world…”

Some readers have expressed frustration with Buck’s self-destructive decisions but right here at FIRSTNAMESMEANINGS.COM it states: “He can be a real perfectionist or even quite obsessive in one particular area, while paradoxically revealing himself to be completely undisciplined in another.”

LUCY: “Lucia was a 4th-century martyr from Syracuse. She was said to have had her eyes gouged out, and thus she is the patron saint of the blind.” Lucy appears briefly in THE HOUSE ON TENAFLY ROAD as a baby. Lucy’s father Simon comes home from The Civil War with a venereal disease – a pretty common occurrence. Simon suffers guilt. I assumed at the time that Lucy was a throwaway character so making her have weak eyes at birth was just to torture Simon – poor guy.  I had no idea that she’d be the light, hope and truth teller that she becomes.  Her personality is as described: “… sociable, friendly, cheerful, communicative, cheeky and likeable with a love of pleasure …” but also “…responsible, industrious, loyal, buttoned-down and attached to stability.” I suppose it’s why Buck finds her so appealing!

WILLIAM (son of John and Kate): is “… charming with an elegant appearance … refined, eager to please and to be liked in return. Sentimentality, beauty and harmony are the values he seeks, somewhat confusedly; such is the extent of his need for equilibrium. Nevertheless, he is quite secretive, reserved and not particularly demonstrative in his interpersonal relations. He is extremely sensitive although he manages to partially conceal this aspect… “ by hiding behind a bottle in this case.

“He is attracted to all that glitters and all that is beautiful, while he wishes to succeed, to be in charge and to be admired. In love, he is an aesthete and is often first attracted by a woman´s beauty, although deep and meaningful exchanges are just as important to him. Therefore, his choices in love could be complex, often hesitating between the beauty of one and the magnanimity of the other or the reassuring presence of so-and-so… He is family orientated and desires a comfortable and attractive home with a wife who he imagines as being the perfect hostess and a fantastic cook, if that isn´t asking too much…” 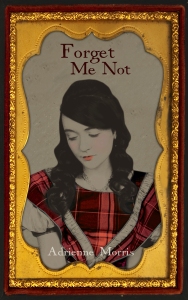 THANKFUL: “these charming women were born to love and bring happiness to others, creating peace, harmony and beauty everywhere they go. Their presence is extremely soothing, and has a calming and balancing effect on those around them. Anxious to please, Thankful  is prepared to make a lot of effort to render herself lovable. She is “sweetness and light” personified: warm and affectionate, pleasant and helpful, she also takes great care of her physical appearance, not without a hint of vanity.” Yet … “they won’t go far …” if their childhood is unstable. (See her sibling Buck’s childhood)

How is it possible that random names could so accurately capture the personalities of characters real and fictional? Do we on a deeper level know what we don’t think we know?

For even more self-absorbed fun I read my own name and found it surprisingly accurate:

Enigmatic and mysterious: two words that perfectly describe these rather paradoxical women. Shy, reserved and unassuming; their behavior can be inconsistent and they are often anxious and nervous creatures who lack confidence in their abilities and have a tendency to become withdrawn. Nevertheless, they could react to this with defiance and a fighting spirit or by choosing a less conformist or unconventional lifestyle … not without pitfalls or changes of heart, due to a high mobility and carefree attitude combined with a certain instability… they will be driven by a desire to learn and mystery, spiritualism, religion, philosophy and anything to do with the cutting edge is bound to fascinate them.

Curious by nature, Adriennes are often quite unusual characters, undoubtedly because they prefer to take the road less-travelled; unless this difference is perceived as an infliction instead of a choice, born out of a certain maladjustment. They are cyclothymic and their emotions can be subject to extremes: alternately experiencing periods of elation, enthusiasm and hyperactivity followed by phases of doubt, helplessness and passivity… Bold and daring at times, they can be incredibly timorous and fearful at others but they tend not to let their distress show on the outside and can therefore come across as being much more easy-going than they really are. As children, Adriennes are extremely sensitive, suggestible and receptive to their environment. If they do not feel secure or loved enough they are likely to seek the affection that is so essential to them outside of the family home.

What about you? What personality traits has your name given you? How do you choose names? I’d love to know all about your name. Go to FIRSTNAMESMEANINGS.COM and then tell me all about yourself!

12 thoughts on “What Does Your Name Mean?”