Why Fred Has No Empathy

Birthing season at the farm always comes with a certain amount of rejection and heartache. Since I’ve switched to sheep from dairy goats at least I don’t have to convince bewildered first-time milkers to jump immediately onto a stand. Our sheep seem hardier than our goats and so far they are better mothers, but there is one black sheep (Kelly) who tries but fails to be as good as her peers. In life equality in the eyes of the law is different from equality of ability and its rewards. Life is unfair. The sheep deal with it (as far as I can tell). 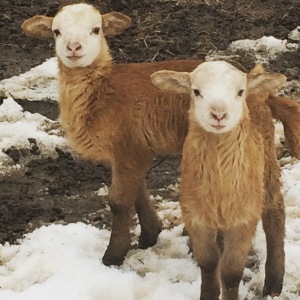 The other morning Kelly gave birth to two mocha-toned lambs and a stunning black ram lamb. He was a little groggy that morning so I made a mental note to keep an eye on him. He’s on my lap now. Kelly didn’t mind him at first but after a few hours of him unsuccessfully searching for her teat Kelly was done. And when I say done, I mean really done, like slamming-the-little-guy-up-against-the-wall done.

I scooped up the victim of inequality into my arms and whisked him into the house. My daughters fell in love with the weakened creature I’d already named PRINCE ANDREI (the jury is still out–will our prince live or die?).

Out in the barn Kelly seems to adore her other children. With animals we say that instinctively they sense the weaknesses of their offspring and make the tough calls. Humans don’t do this–or do they?

On one hand, humans have written tragic and inspiring stories about sickly, beautiful people (Prince Andrei). On the other we rationalize exterminating people either because they don’t share our viewpoints or because they are mentally or physically deficient(to put them out of their perceived misery).

Did you know that mentally or physically weaker children have a higher likelihood of being abused by a parent? Many times siblings are spared the rod while one child is made victim.

In a very micro way I saw this play out in my own family. My father (and his father before him) blurred the lines quite often between teasing and severe verbal abuse. I learned early on how to manipulate the system by skirting rules and remaining in the shadows. I also played the good girl role. A sibling who was slow to develop verbal skills was subjected to constant verbal abuse, as was another sibling who had trouble with her weight. Another was just more sensitive  and was teased for her sensitivity.

In the few studies that I’ve found on the topic mental health professionals wonder what happens to the child who only watches the abuse of a sibling. The child has discovered a way of avoiding personal harm yet lives in a chaotic environment of constantly shifting alliances. The child is “friends” with the parent and feels guilty about their siblings.

In my case this led to a lack of empathy for my siblings who seemed to bring on the chaos. As a young child exposed to too many shows about humankind’s destruction of endangered species I felt a great sense of guilt for suffering furry things. I hated people and myself in particular. I bullied other children–especially my  best friend (who was also abused at home).

In my books Buck is the singled out CHILD OF ABUSE. Fred, his (evil?) twin, is the watcher. He’s the smart one who plays the game right and loses his ability to empathize with victims. As with all my characters, his is not a lost case. He has moments of love–especially for his twin–but his instincts for survival are too strong.

Sheep bash weak ones against hard things. Humans are special and different. Unlike sheep we are capable of seeing possibilities in the weakest of us. Going around bullying people is the easiest and stupidest thing we humans can choose to do (even if the person you want to kill voted for someone you hated).

There is no reason for us to act like a bunch of sheep. I don’t bully people anymore. My father not only teased us but also loved us deeply. I knew his flaws and still loved him. My siblings were obviously the victims of a behavior that was seen as perfectly normal and harmless–I see that now.

People and their relationships are so incredibly fascinating. The suffering, the resiliency, the love, the hate.

Sheep are cute but humans are so much more. The possibilities are endless.

2 responses to “Why Fred Has No Empathy”