A soldier poked his head in to the coach to greet the Crenshaw family when they came to a stop. He scanned the group of strangers. Opening the door, the soldier held out his hand to Buck’s sister Meg. “Allow me to help you, miss.”

Despite her best efforts to appear unmoved, she giggled, blushed, and took the soldier’s hand. “Thank you, sir,” she said, hopping down as lightly as she could but still managing to bump up against the soldier.

“Will you be staying long enough to attend one of our dances, miss?” the soldier asked. “A pretty girl like yourself would be happily employed all evening. Do you like to dance?”

Meg pursed her lips but replied, “I love to dance.”

“Bully. You might reserve a dance for me. I’m Lieutenant Wilder. Royal Wilder.” He called to Buck. “You never told me you had two lovely sisters, Crenshaw!”

The rest of the family descended into the withering heat of mid-afternoon, shielding their eyes.

“Lieutenant Wilder,” Buck said, “this is my father, Doctor Graham Crenshaw, and my mother, Margaret Crenshaw, and this is Fred. You’ve met Meg.”

“You may call me that if you like,” Meg replied with wide doe-eyes as she fanned herself.

Margaret took her by the arm. “My daughter is rather forward, sir. You may call her Miss Crenshaw. She’s not a sodbuster’s daughter.”

The man kept smiling. “Whatever you say ma’am. I suppose your daughter gets her looks from you.”

“You soldiers don’t charm me in the least, sir,” Margaret said. “Meg’s not meant for frontier living.”

“Yes, ma’am,” Wilder said but turned and winked at Meg.

“Yes. Certainly. And it’s been a pleasure meeting you all,” the lieutenant said, touching his cap.

Meg waved. Margaret caught it and slapped her hand. “Young lady, you are not to make eyes with every bold soldier you see. Besides, you should realize that Mr. Wilder was obviously not serious. I saw the way he laughed at your clumsiness—that’s why he mentioned dancing—as a joke on you, dear. I tell you all the time that there’s a great deal of difference between plump and downright fat, and you have long since crossed that line—just like your father. Do you think I’d ever be brave enough to dance with him?”

“Sis, the lieutenant’s fat too,” Buck said. “Wilder’s in no position to judge.”

“Oh, Buck, you’re a caution!” Fred laughed. “Is this the new man? All full of helpful honesty.”

“Meg, I didn’t mean it the way it sounded,” Buck said.

Buck kept quiet, but thought to himself, “I will forgive her because I must.”

“Were these buildings erected by soldiers?” Margaret asked. “They certainly are shabby. Thankful would have one believe she lived in a paradise. God deliver us from this sand!”

“Well, maybe you can teach us how to do it properly, if you’re so smart,” Fred said. “What did those soldiers call you? Apostle? Give us a break if you would. I see nothing but the same old Buck insulting his mother and sister. It’s no wonder you have no luck with the ladies.”

Buck lunged forward, but then said, “No. I won’t do this. I won’t fight you.” For a moment Buck had shown restraint. He thanked God.

“Good thinking. You’ve never beaten me yet at anything. You need me, so stop being a fool.”

“I don’t need anyone—but God,” Buck said not sure if he meant it.

Fred, Margaret and Meg laughed uproariously. Graham looked disturbed. “You seem tired, son,” he said, but Buck knew he meant “unhinged” by the tone of his voice.

“Look what happens when you’re left alone,” Fred said. “You take up with niggers, get beaten and shot. Now you go over into a religious rapture …”

“I’m afraid that Fred is right, dear,” Margaret added. “You need guidance—someone to stabilize your mind. You’re a danger to yourself, and that’s a fact.”

“No,” Graham said. “Buck can and should stand on his own. He’s struggling lately. It’s why he needs the crutch of religion, but it’ll pass when he’s stronger.” 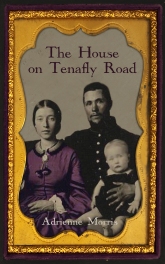 One thought on “Fiction: Honest Appraisals”