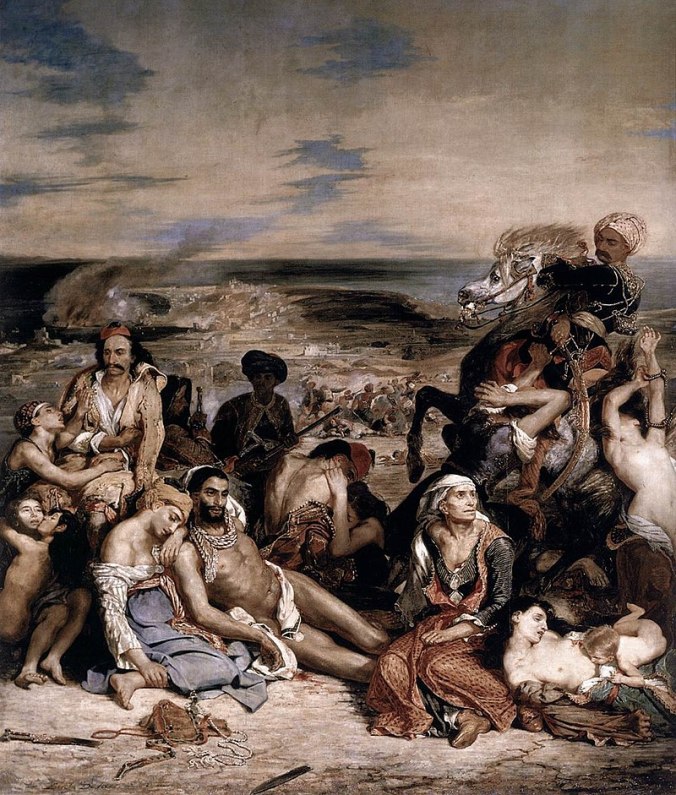 Massacre at Chios by Eugene Delacroix

“In March 1822, as the Greek revolt gathered strength on the mainland, several hundred armed Greeks from the neighbouring island of Samos landed in Chios. They attacked the Turks, who retreated to the citadel. Many islanders also decided to join the revolution.[2] However, the vast majority of the population had by all accounts done nothing to provoke the reprisals, and had not joined other Greeks in their revolt against the Ottoman Empire.[5]

Reinforcements in the form of a Turkish fleet under the Kapudan Pasha Nasuhzade Ali Pasha arrived on the island on 22 March. They quickly pillaged and looted the town. On 31 March, orders were given to burn down the town, and over the next four months, an estimated 40,000 Turkish troops arrived.

In addition to setting fires, the troops were ordered to kill all infants under three years old, all males 12 years and older, and all females 40 and older, except those willing to convert to Islam.[6]

Approximately three-quarters of the population of 120,000 were killed, enslaved or died of disease.[7][8] It is estimated that 2,000 people remained on the island after 21,000 managed to flee, 52,000 were enslaved and 52,000 massacred.[9] Tens of thousands of survivors dispersed throughout Europe and became part of the Chian Diaspora. Another source says that approximately 20,000[10][11][12] Chians were killed or starved to death. Some young Greeks enslaved during the massacre were adopted by wealthy Ottomans and converted to Islam. Some rose to levels of prominence in the Ottoman Empire, such as Georgios Stravelakis (later renamed Mustapha Khaznadar) and Ibrahim Edhem Pasha.[13]

There was outrage when the events were reported in Europe[14] and French painter Eugène Delacroix created a painting depicting the events that occurred; his painting was named Scenes from the Massacres of Chios. Wikipedia

6 thoughts on “Nothing is easier than to denounce the evildoer; nothing is more difficult than to understand him. —Fyodor Dostoyevsky”