Sarah Breedlove was not the type to crawl up into the fetal position when tragedy struck. Sarah’s parents celebrated the birth of their first child not born into slavery–but not for long. First Sarah’s mother died. Her father remarried–and died. An orphan, Sarah went to live with her sister and her abusive husband. To escape the abuse Sarah married Moses Williams, but soon after the birth of their daughter Moses died.

There are some people who under similar circumstances might turn from God or throw themselves into the deep end of a pool having not learned to swim. Sarah Breedlove was not this sort.

All the way to St. Louis with her young daughter squirming on her lap Sarah fought the urge to scratch her itchy scalp (or at least that’s how I imagine it). After years of lye soap and nerves Sarah suffered from dandruff so severe she was balding. Not a good look for a future millionaire, but I get ahead of myself.

Sarah’s brothers owned a barber shop in St. Louis in which Sarah learned about hair care. She found work as a washerwoman, vowing to save her dollar a day pay for an education. Fate used her itchy scalp in another way. Sarah took a job on commission selling for another black hair care entrepreneur (capitalism has its success stories)  ANNIE TURNBO MALONE.

Sarah moved to Denver and married a newspaper and advertising man who encouraged her passion and helped her develop an advertising campaign for her new mail order company. Madame C. J. Walker as Sarah was now called traveled the country with her husband selling not only her hair care products but the idea that African American women could be the captains of their lives even in a time of lynchings, poverty and prejudice. She recognized that even in the turbulent times she lived that hard work and good marketing smashed glass ceilings.

Sarah hired women. This is key. She didn’t bemoan the fact that men hired men. She hired women. She trained them to be “beauty culturalists.” She organized clubs and rallies for women who aspired to greatness. Here was a rare woman not threatened by other women. Sarah bred love wherever she went. She even hired the first licensed black architect in New York VERTNER TANDY to build her mansion.

One might wonder if Sarah only helped other women because it helped her company, but that was not the case. Sarah stressed to her women followers the essential thing to a life well-lived: helping others. She threw herself into politics, but more importantly threw her money into philanthropy, donating much of her wealth to orphanages and campaigns against lynching. Some say the Civil War wasn’t about slavery, but boy, it was. Think of the sorry state of Indians on reservations. They got some land. Black Americans were given something better and more powerful: a political voice. It’s been a roller coaster ride for sure and not a perfectly safe ride, but look at Madame Walker.

Sarah never waited or asked why me? (maybe she did sometimes but never let the why paralyze her). Sometimes, most times, it’s better to look at heroes than problems. Sarah Breedlove lost so much and came from so little. Plagued with dandruff (something that might send a lesser lady into hiding) she never said I can’t do this because I’m black and I’m a woman and I’m an orphan and I’m poor and uneducated. 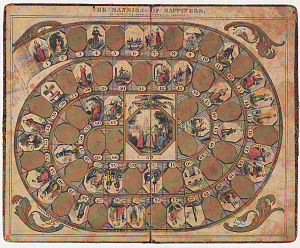 The Mansion of Happiness Board Game

Will you get to heaven or to a seat in the capitalist’s board room? Depends on what game you play.

“Instructions upon spaces depicting virtues move the player closer to The Mansion of Happiness while spaces depicting vices send the player back to the pillory, the House of Correction, or prison, and thus, further from The Mansion of Happiness.[7] Sabbath-breakers are sent to the whipping post.[7] The vice of Pride sends a player back to Humility, and the vice of Idleness to Poverty.[8] The game’s rules noted:

“WHOEVER possesses PIETY, HONESTY, TEMPERANCE, GRATITUDE, PRUDENCE, TRUTH, CHASTITY, SINCERITY…is entitled to Advance six numbers toward the Mansion of Happiness. WHOEVER gets into a PASSION must be taken to the water and have a ducking to cool him… WHOEVER posses[ses] AUDACITY, CRUELTY, IMMODESTY, or INGRATITUDE, must return to his former situation till his turn comes to spin again, and not even think of HAPPINESS, much less partake of it.” Wikipedia

Read more about the transformation from piety to materialism in board games HERE.