“The ultimate goal of farming is not the growing of crops, but the cultivation and perfection of human beings.”

The morning begins. Those first sleepy moments are driven off by the cold in the mudroom as I tug my thick overalls and muddy boots on over my pajamas. There is something to knowing you’re needed, a mutual, satisfying feeling between the animals and me. We always say that every day is a good and pampered one for the animals except for their last.

I can’t imagine the loneliness of a farm with no animals. When we must load lambs off on their last day I cry and seriously consider giving it all up. But then I remember how sick I was without meat, and think too about the state of factory farming, and how life is a series of compromises. Not a single human soul is truly pure or innocent.

“I dislike the thought that some animal has been made miserable to feed me. If I am going to eat meat, I want it to be from an animal that has lived a pleasant, uncrowded life outdoors, on bountiful pasture, with good water nearby and trees for shade.”

When you raise animals you tend not to waste their sacrifices. I laugh at the ram lambs as they gambol about and admire the proud ewes as they murmur sweet nothings to their newborns. They clean and dote over them with such soft looks in their eyes — looks that disappear after the little brutes get bigger and nearly upend her seeking milk.

Every night there’s the big sky in its various moods as I trudge down to the barn. The wind, the snow, the sun, the autumn leaves in little whirlwinds in the apple orchard — all things to keep me forever in the world, forever in the seasons, forever dirty, forever unfinished.

For the curious there is always so much more to learn. For someone like me who is so attached to the past, there is nothing better than discovering how my ancestors went about doing the same chores I do now.

Work keeps me sane and the seasons keep me from ever complaining about the monotony of chores. Yet chores aren’t really monotonous. Chores are dependable. Every night I announce, even when we have visitors, “Okay, I have to go do the animals.” It’s funny to think that for ten years I’ve said it exactly the same way. Not a single word changed. The tone is almost a complaint, but not really. Once I’m alone and outside I’m happy to be there.

“He who tills his own land has food in plenty, but he who follows idle pursuits is a fool.”

The mini horse with his big personality always whinnies at the sound of the house door slamming. He still likes to push me around but I’ve charmed him into doing things I want to do as well. We’ve become friends. Every year I get quieter. I think it’s a spell that comes over some people who grow lots of things and keep farm animals. There’s so much to witness, tiny signs and bugs that hint at future doom or survival. Intuition, that feeling in your gut, becomes attuned to the dull look in a sick sheep’s eye. Sometimes in this quiet you know exactly what that dull look means.

I love the sound of a ticking clock. When I’m writing I prefer that to be the only noise. The other day the house was silent but for the ticking. I sat to write but was nudged by some spirit to go to the window. There against the white snow stood a fox staring right into our chicken coop. He looked curious, but I’m pretty sure he was just deciding which color hen he wanted for lunch.

The indoor farm dog was sent out to chase as I stumbled into my boots shouting from the garage (as if a fox would ever listen to me). The snow was so bright I was nearly blinded and didn’t get to the coop as fast as I would have in better weather. We lost one chicken. I spent much of the morning trying to corral the frightened flock inside for safety. Some regarded me as their savior and let me carry them into the coop. I felt complimented. The chickens are lucky. We take the eggs they couldn’t care less about and they live until they die of natural causes (whatever that means for animals with so many predators loving the taste of chicken).

I’m so happy that there are young people as entranced with the old ways as I am. The ideal of total independence is just that — an ideal, but without a grassroots embracing of the small and local, our land and independence will be swallowed up by an ELITE FEW who want to control (and change) our food supply. Slavery starts when the few control the very sustenance of life.

Okay, so here’s my solution:

Let me back up to let you know what the problem is.

We suddenly have a ton of cute and cuddly animals I don’t want to eat. My husband has been diagnosed with a weird form of arthritis that only seems to respond well to a strict vegan diet. Our sheep are meat sheep.

But the sheep are more than their supposed foodie purpose. They are distinct personalities who in many cases adore human friendship. 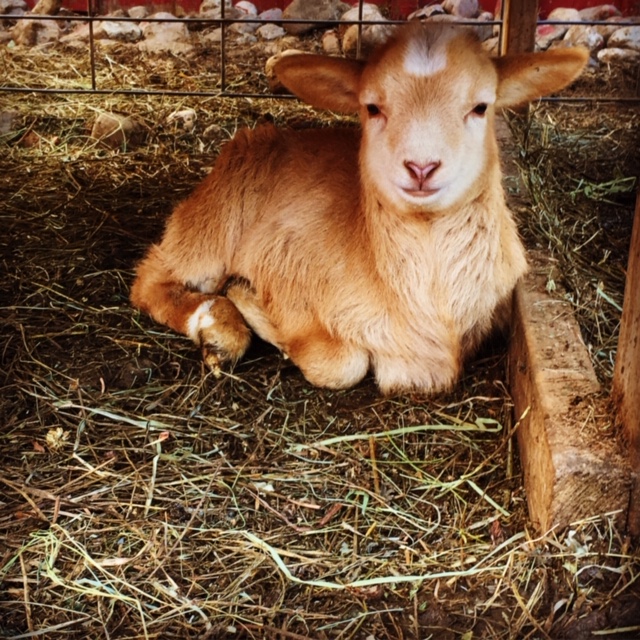 So here’s my idea: sheep therapy or basically sheep chill time. I’m not a therapist and don’t want to be one (I already have the high maintenance little girl to contend with).

But I’m wondering if people would enjoy coming by the farm just to hang out with the friendly sheep, goat and horse.

There are some concerns though. I do want to get back to writing some day. Lately I’ve had to begin training myself to be a horse trainer. I’ve had to help a few ewes give birth and our daughter has ratcheted up her boundary breaking (a common after effect of adoption) so I’m not sure how many days I could even devote to this new plan.

Any ideas??? I’d love some input from you all. Do any of you have daydreams about opening shops or selling tea online? Let me know in the comments and be sure to leave any advice you might have!

Look! My books are in the library! 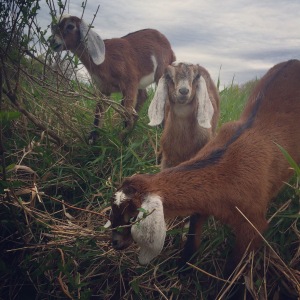 A few weeks ago I visited with a lady who rescued a cream-colored dairy goat from a farmer who had bred the goat multiple times. No problem there, but when the goat waddled out of her cozy, straw-filled stall into the main section of the sweet-smelling barn I saw right away why this woman had felt the creature needed to live with her.

The goat had deformed front hooves that caused her to walk on her knees. She also had a huge under-bite which made her look funny. My first thought was that most people would have put this animal down at birth. Instead the farmers bred her multiple times (maybe a financial necessity) before agreeing to give the goat away.

At this point when the lady was telling me the story  the goat had come up beside me, giving me soulful look. It leaned in like a Golden Retriever would waiting to be petted. The lady told me that many adults and children have found peace and some healing from emotional wounds just by sitting with this little beam of sunshine. Who is to say that her life doesn’t matter?

For you have formed my inward parts: you have covered me in my mother’s womb.

I will praise you; for I am fearfully and wonderfully made: marvelous are your works; and that my soul knows right well.

My frame was not hid from you, when I was made in secret, and skillfully wrought in the lowest parts of the earth.

Your eyes did see my substance, being yet unformed; and in your book they were all written, the days fashioned for me, when as yet there were none of them.

How precious also are your thoughts unto me, O God! how great is the sum of them!

The earth is the Lord’s and the fullness thereof.

Oh, God, enlarge within us the sense of fellowship with all living things; with our brothers the animals to whom Thou gavest the earth as their home in common with us.

We remember with shame that in the past we have exercised the high dominion of man with ruthless cruelty so that the voice of the earth, which should have gone up to Thee in song, has been a groan of travail.

May we realize that they live not for us alone, but for themselves, and for Thee, and that they love the sweetness of life even as we, and serve Thee in their place better than we in others. 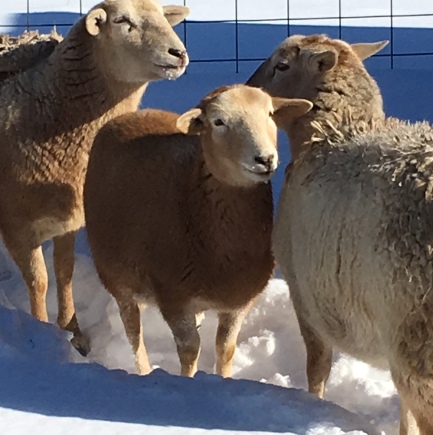 “Ask the animals, and they will teach you,

or the birds of the air, and they will tell you;

or speak to the earth, and it will teach you, or let the fish of the sea inform you.

Which of these does not know that the hand of the Lord has done this? In his hand is the life of every creature and the breath of all mankind.” (Job 12:7-10)

HAVE A PEACEFUL WEEK!